Why do Cats Seem to Have Nine Lives?

Some people believe cats have nine lives because they have an uncanny ability to survive falls from heights that would normally kill a dog or human. Their high survival rates may be associated with their response to Terminal Velocity; a body falling at maximum acceleration. When a cat reaches terminal velocity the balance center in their brain becomes less stimulated and they actually relax when free falling. At this time cats splay their legs out horizontally like a flying squirrel. This body position increases air drag and also helps to evenly distribute the force of impact on the body. Cats also appear to reach terminal velocity after falling only 5 stories where humans can only reach their maximum speed after falling 32 stories. While humans often die after falls greater than 6 stories, a cat’s survival rate is 90%. When cats fall from shorter heights they struggle and land awkwardly often causing substantial injuries or death. Shorter distances do not give them ample time to reach terminal velocity and adjust their body posture.

Now saying this please keep in mind that they still can suffer traumatic injuries, the most common being chest trauma or broken limbs. Even though cats are very agile care should be taken around balconies and windows. If it not possible to prevent access to a balcony then do not leave unattended and keep a harness on your cat. Ensure all windows have sturdy and intact screens. So it is true, your cat may survive a fall but then again he might not. Or at lest not without injury. Remember safety first and prevention is best. 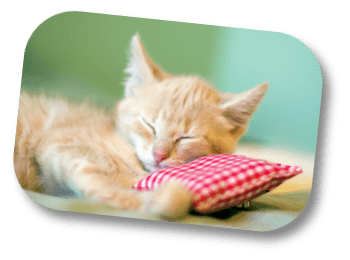 A Guide to Understanding Feline Behaviour

With recent changes to restrictions on businesses, we have made some important updates to our operating policies.

1. WE CAN NOW SEE ALL CASES BY APPOINTMENT ONLY

2. SAFETY MEASURES TO KEEP EVERYONE SAFE

We are OPEN with the following hours:

Have you welcomed a new furry family member to your home? We’d love to meet them! Visit our Must Know New Pet Owner Information page for useful resources and helpful recommendations for new pet owners.

Thank you for your patience and understanding and we look forward to seeing you and your furry family members again!